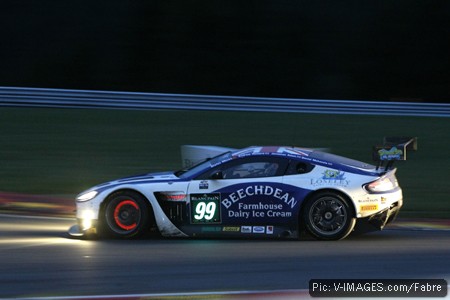 Daniel’s first-ever 24-hour race saw his Beechdean Aston Martin team qualify on pole, lose 30 laps to a sudden mechanical failure, then soldier on through the night to achieve a hard-earned top 10 in their class.

The race counted as the fourth round in the Blancpain Endurance Series and the German made an immediate impact, seizing pole with a best time of 2:20:675. This was fast enough to better the entire Pro class field and set him up to lead the 72-car field for the first hour around the 4.35-mile, 20-turn circuit.

By the time Daniel became the third of the team to take a turn at the wheel, running the first of his four stints, pitstops had relegated the car to the margins of the top 10.

He was able to battle back and regain some places, but disaster struck on lap 123 as Adam drove the fifth hour of the race. The car’s splitter failed, wrecking a front tyre and leading to extensive bodywork damage. 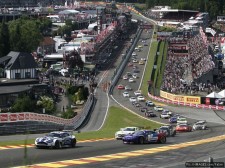 Leading through Eau Rouge for the first time

Daniel said: “The race started well and we were leading. We went through the stints, and it was looking OK after Andrew and I got in – I think we were about third in class.

“Then the splitter failed and went through the tyre, causing a catastrophic blow-out. It dropped the front end onto the ground and quite badly damaged a lot of it.

“The car came into the pits and went out again about 15 laps down, but about 30 minutes after returning to the race a fixing failed, which took more time to repair. After that we were about 30 laps down and knew that a good result was completely out of the window.”

However, the team’s back-up plan had always involved pushing on, as they knew the race was likely to see many retirements. So it proved as heavy rain, night-time driving and the gruelling effects of the distance caused half the cars to retire.

Daniel said: “We had always planned to complete the race – we knew if we did we’d finish in a reasonable position as it would be a race of attrition. 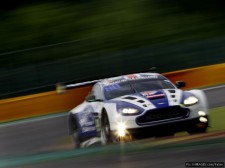 On track in the Total 24 Hours of Spa

“We plugged on through the night and gradually moved up the order as other people got punctures, crashed, had engine failures or fired themselves into the barriers.

“Because we were able to stay on, execute our strategy and be consistent we ended up finishing 23rd overall and 10th in class. It wasn’t the result we were hoping for but we finished the race.

“There will be an investigation into the splitter, but to find out that almost 50 per cent of the field failed to finish the race is a testament to the car and proof of how much hard work the Beechdean AMR guys put in.

“It was a great team effort and they got the repairs done without us losing too much track time, so I really credit them for that.

“The car had a decent pace, it was just a shame we got those problems early on, but a top-10 at the end was a great result for my first 24-hour experience.”