In depth: a hard-earned podium at Paul Ricard

Another race, another podium – at first glance, the French round of the European Le Mans Series looked like ‘business as usual’ for Daniel and his JMW Motorsport team-mates. But earning the champagne celebration at the Circuit Paul Ricard was not as simple as it appeared, as Daniel explains in this website exclusive. 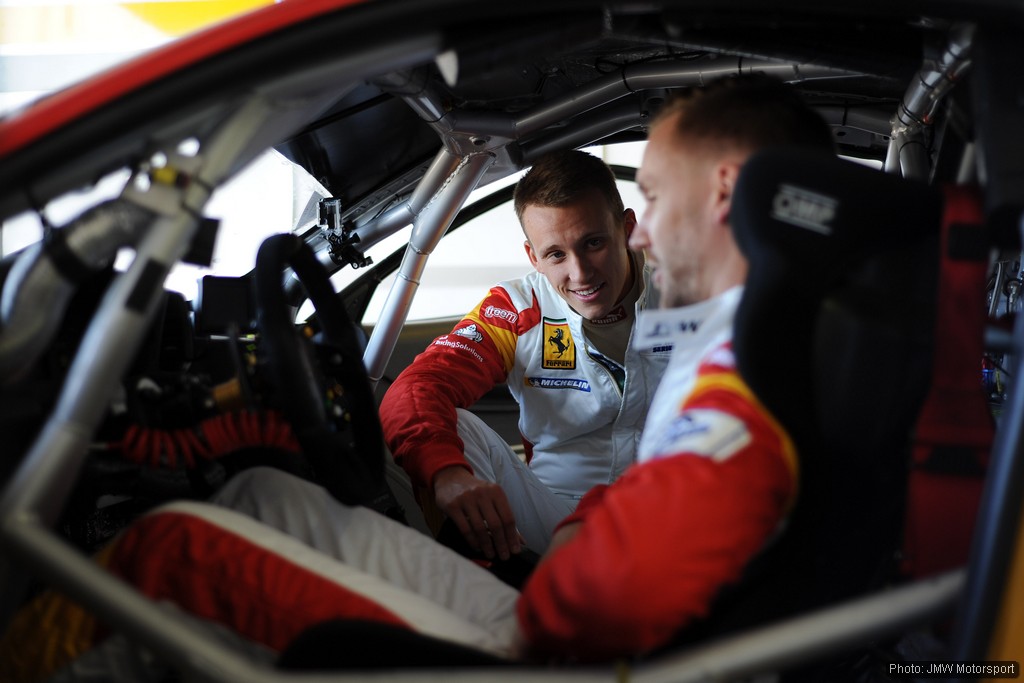 “There was a little bit of panic when reports came over the radio that the engine was cutting out,” recalls Daniel McKenzie about the moment when JMW Motorsports’ third consecutive podium looked suddenly in danger.

It was the closing stages of Les 4 Heures du Castellet at Circuit Paul Ricard and the team’s Ferrari F458 Italia was in the experienced hands of James Walker as he sought to build on the success of Daniel’s opening double stint.

The third stint had seen George Richardson put in a solid performance but, as a bronze-rated driver going wheel-to-wheel with gold-rated rivals, he had been unable to hang onto the lead Daniel had earned. Walker had taken over for the final hour adrift by 25 seconds but determined to close the gap. 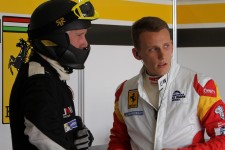 Tense moments in the garage. Pic: JMW Motorsport on Flickr.

And then the engine had started to cut out.

What happened next was a case study in how an efficient race team deals calmly with unexpected problems: “We were lying in third and had a 50sec buffer to fourth,” recalled Daniel.

“It’s not nice to have an issue at the end of a race because a lot of work has gone in by team and drivers to get you in an advantageous position.

“But the issue was only intermittent and not a big one, so the team was calm about it once they had spoken to the Ferrari engineers. It wasn’t pleasant but having so much time in hand made it slightly less intense – we were still always likely to finish third so I wasn’t overly stressed.”

Instead, for Daniel the tension had come at the start of the race, where the apparently familiar scenario of the Englishman working his way to the front by the end of his double stint disguised a difficult opening period.

He said: “The first stint was a bit tricky as we kept the same tyre compound we had qualified on and we perhaps should have gone with a slightly harder one. The car was a bit of a handful, but I kept plugging away.

“That first stint was all about nursing it and making sure I could bring it in without any silly mistakes. I came in at the end of it and changed to a harder tyre, and the second stint was much more competitive.

“The balance was much better in the second stint. I made quite a bit of headway and also managed to keep Rugolo behind me, who’s been one of the quickest drivers.” 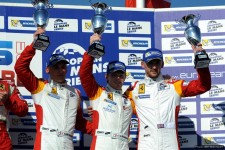 On the podium again. Pic: JMW Motorsport on Flickr.

Under the circumstances, third place was an achievement: “It’s a shame a win wasn’t on the cards but where we finished was OK considering. I think we all drove well but it just wasn’t our weekend with the engine issues in the last stint. They lost James time, and you could say we were fairly lucky to finish the race.”

The result means that the JMW Motorsport team lie third in the championship, locked in a three-way battle for the runner-up spot, with just the Estoril round on October 18-19 remaining.

Daniel said: “Winning the championship is now impossible, but second place is still up for grabs. It’s only five points, which is minimal, but behind us it’s only one so we’ve got a real battle.

“We can still potentially finish second, but we’ve got to do everything right so that we don’t slip back to fourth. It’s going to go down to the wire, I think.

“I’ve raced and tested at Estoril, but it was 2008 when I was last there. I like the circuit and I like the place, and from what I’ve heard the team and the car are very quick, with a good set-up. I have high expectations and I am sure the car is going to go well.”

Please go to the Instagram Feed settings page to create a feed.