In depth: The heat is on at Estoril

In this website exclusive, Daniel takes us behind the scenes for the season-ending Estoril ELMS round, and talks about how his team JMW Motorsport upset the odds with every podium they earn.

For the final race of the year, Daniel and his JMW Motorsport team battled against sweltering conditions caused by a ventilation problem to bring home another podium and end the season on a high note.

The Estoril round of the European Le Mans Series proved a mix of the familiar and the new, with the return of gold driver Daniel Zampieri to the team’s Ferrari F458 Italia and a switch that saw McKenzie drive the middle two stints instead of his usual opening pair.

The change, which saw bronze-rated driver George Richardson open the race, allowed the team to try new strategies without risking overloading the tyres. It was only the second time in his GT career that Daniel had not taken the initial stints. 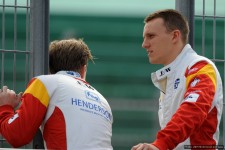 Daniel and George Richardson at Estoril

He said: “I’ve started all of my GT races apart from the Spa 24 Hours last year, so it was a weird experience watching it unfold before your eyes knowing anything could happen.

“However, it wasn’t particularly hard to adapt to the change as I now have a lot of experience with the car and GT racing in general. The biggest difference is that in the middle stints you can find yourself overtaking the slower GTCs while at the same time getting out of the way of the LMPs.”

The switch also brought a new perspective to driver changeovers, where McKenzie is used to emerging, exhausted after a double stint, into the flurry of a pit stop – but is less familiar with being the driver who has to quickly get into the car.

“We spend a lot of time in the garage during the weekend doing driver changeover practice,” he said. 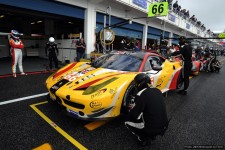 “You’ve got a time you need to complete the changeover in, to allow the team to change the tyres without getting in the way – and if it’s a fuel-only splash and dash you’ve got to be in and out even quicker.

With JMW’s customary efficiency at work, the change-arounds did nothing to disrupt the team’s challenge, and McKenzie believes that, had the drivers not been affected by a ventilation problem that made the interior of the car distractingly hot, the race might have been winnable.

He said: “JMW put in so much preparation and, at race weekends, they are one of the fastest teams out there for pit stops.

“It was also good having Daniel Zampieri back – he’s a great driver who works well with the team and always shows good pace in qualifying. He missed pole by a tenth of a second, which was a shame, but he gave George a decent starting position. 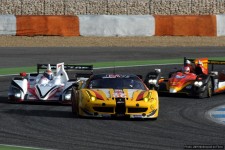 “Once the LMPs had disappeared down the road George put his head down and did a very respectable job, setting us up well for a podium. In the end it was quite tight all the way down to fifth. First and second were only about 10 seconds away from us.

“It was a fairly respectable result – although it was horrendously hot because of a ventilation issue in the cabin, and that made it one of my hardest races ever.

“There was a real possibility of winning that race. If only driving conditions had been better, we drivers might have been able to keep our pace more consistent.”

The result meant the team had recorded yet another third place – a remarkable record of success for a small independent team in a highly corporate world, but still frustrating.

McKenzie said: “All year, it’s been it could have been a second or a win but, for everything to go right and get that win, you need a little bit of luck too and it just didn’t quite go our way. I think we had as many podiums as anyone, just not quite on the step that we needed.

“Third has been the bane of our lives this season. You get home and see your friends and family, and they say ‘how was it’, and you say ‘another third’.

“It’s not a bad thing to be disappointed by, though. It was a very successful year – if I had known at the start of the season that I was going to be third in the championship and on the podium four out of five times I would have taken that so, when I look at the trophies on top of the cabinet, I’m not too disappointed.”

Looking ahead to next season, he hopes that his role in driving double stints in a car that achieved such consistent success will create opportunities: “The silver driver is the guy that’s in the car the most, so the results do reflect more on me.

“There’s a lot that goes on in a four-hour endurance race, so managing to get 80 per cent podiums and always being there is a feat – hopefully it will open doors for me.  It’s also been nice to race against the gold drivers without them pulling away.” 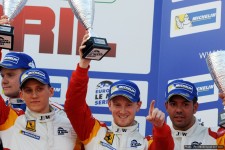 And he was full of praise for his team: “I’ve been very impressed with what JMW have done this year. They’ve given 100 per cent in everything they’ve done, and you can’t ask for more in a team than that.

“Most of what you see in GT racing is corporate teams with many cars in many championships – there aren’t many like JMW with one car in one championship. They’re the big underdogs – because they’re a small team they don’t have cars out every weekend gathering data, but it works.

“History tells us that generally the smaller teams with fewer resources don’t do so well, but JMW is one that proves you don’t need fancy garages and trucks for it to work and for them to be competitive. It makes it much more rewarding – much more personal.

“They’re a family team and I’ve felt very welcome as part of that family. I’ve loved every minute of it and, if something in the future does come up with them, I will be very receptive to it.”