Bright lights, cat-naps and endless planning: the inside track on racing for 24 hours

A 24-hour endurance race tests teams, cars and drivers to the extreme. In this website exclusive, Daniel gives the low-down on what it’s like to race all day and all of the night. 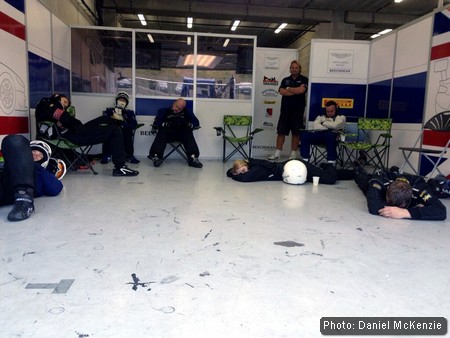 Sleep: a rare and precious thing in a 24 Hour race

For Daniel McKenzie, the 24 Hours of Spa represented a first taste of all-night racing as he and his Beechdean AMR team-mates Andrew Howard, Jonny Adam and Stefan Mücke attacked the fourth round of the Blancpain Endurance Series.

With a single seater background involving short sprint races and minimal wear and tear on both car and driver, there was a lot for him to learn about this opposite extreme of endurance racing.

But a top-10 finish and some veteran team-mates ensured he was bitten by the all-nighter bug. He said: “It’s a really eye-opening experience and a fantastic feeling – it’s great to be part of the whole team atmosphere. 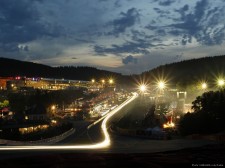 “I didn’t do a great deal of the night driving because I have less experience of it than Jonny and Stefan – naturally, they were going to be slightly quicker because of that so I was better utilised racing in the daylight.

“However, I did into the evening when it was turning dark, and I did the night tests that everyone has to do and it’s a great buzz.

“When you’re following another car it’s very easy to get into a rhythm, the difficulty comes when other cars come up around you and you’re seeing so many different lights.

“It becomes very difficult to concentrate on the track with all the flashing and bright lights and other impositions. It’s madness, like tearing down a country lane flat out with your beams not dipped.”

But it’s not just the darkness that requires adjustment for a driver more used to shorter races. This isn’t called endurance racing for nothing, with basic needs like food and sleep requiring careful management. 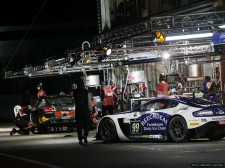 A night-time pitstop at Spa for the Beechdean AMR team

Daniel said: “One of the many differences in a 24-hour race is about planning your own mental and physical approach. You’re in the car for a lot longer as you’re double-stinting at times.

“You have got to change how you approach the race weekend, including making sure you’ve got your nutrition right and managing to get some rest and some sleep in throughout the race. It’s a whole day and you burn up your stores quickly through being awake longer than you normally would be.

“You’re never going to get a solid sleep but you have to take the odd hour or two when you can – although it’s hard to step away from the garage because you always want to know how your team-mate in the car is getting on.

“You find yourself spending hours looking through data and at timing screens, and talking to the engineers about how the car is and how the track is evolving. You need to know as much information as possible before you go out again. A lot of the time that you’re not in the car is spent planning for the next time you are.

“There is a lot more strategy involved because there is a lot more to the race – driver stints, who is going in when, what pace to drive. You have to plan everything to the last minute and that’s a lot of planning and strategy.” 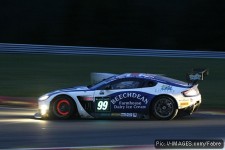 And for those teams whose planning pays off, win or lose there is something to celebrate: “At the end of the race the feeling is almost relief, far more so than in a sprint race. Everyone down the pit lane is cheering – it doesn’t matter where they finished, they are all celebrating just to have finished the race.

“Each car will have run almost 5000km during the weekend, that’s more running in one day than in the whole of the rest of the season. It’s a great testament to the cars and a great feeling for the teams when they’ve managed to get through the 24 hours – every team is made up to bits that they’ve managed to finish the race.”

This entry was posted in Features and tagged Beechdean Motorsport, Total 24 Hours of Spa. Bookmark the permalink.