The heat is on as Daniel scores back-to-back podiums 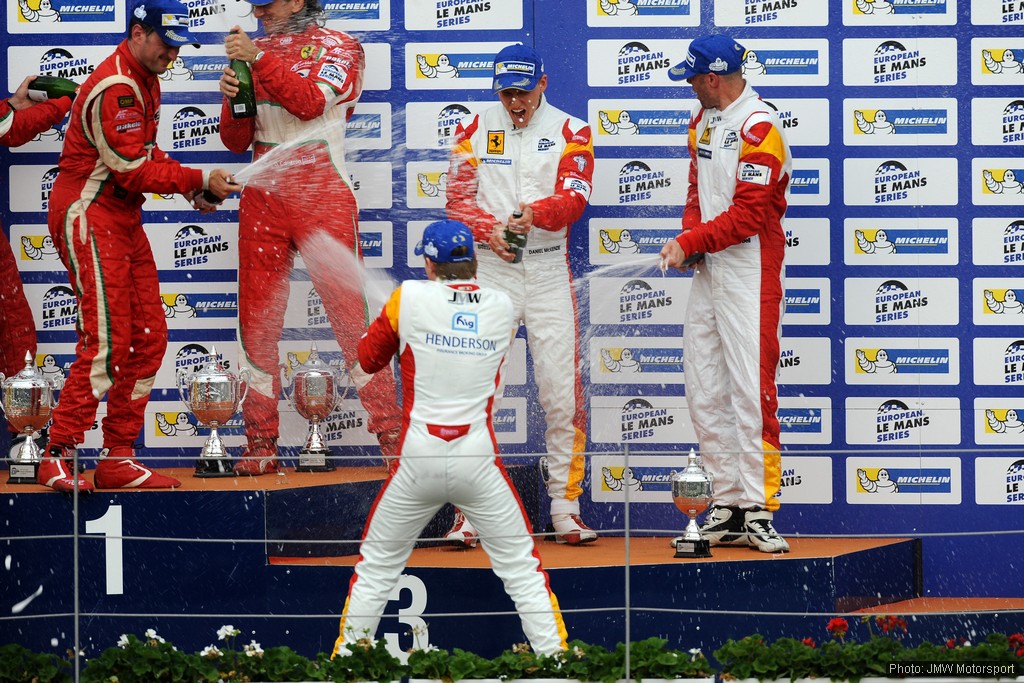 Daniel McKenzie and the JMW Motorsport team earned their second consecutive podium in the blazing heat of Austria’s Red Bull Ring, putting themselves right in the mix for the European Le Mans Series championship.

Third place in the race puts the team and its Ferrari 458 GT third overall in the championship going into the two-month summer break before the next round at Circuit Paul Ricard in September.

And despite a driver change as the unavailable Daniel Zampieri was replaced by veteran Rob Bell, some minor race incidents and a tense last few laps, what struck McKenzie most about the weekend was how routine it felt – something which he sees as highly encouraging for the rest of the season.

He said: “It says a lot for the team that we can have a weekend that just felt good, and not sensational, and yet we still earned a podium. It shows that when we get everything fully hooked up we can realistically aim to win.

“We’re already in the middle of a five-way fight for the championship with two rounds left, and if we can win when the leaders have an off day we’ll be in with a real chance.”

The weekend started well, with a strong practice session and Bell fitting easily back into the team before qualifying the car successfully.

Daniel said: “Rob’s a JMW old salt who knows the team, the car and the championship – a man of massive experience, and a nice bloke too. We had a positive practice day. There was pace in the car and the session was productive.

“Rob then qualified us fourth in class, which was a very good result. He didn’t quite get the front row, but in a four hour race that’s not so important and we were all pretty happy.”

As usual Daniel opened the race with a two-hour double stint, stopping for fuel but not tyres after the hour. With temperatures on the track reaching 40 degrees, drivers and cars alike were feeling the effects but Daniel was able to keep pushing.

He said: “My time in the car was eventful. I got up to second place in the first lap and a half, behind the Aston, and we managed to pull out a bit of a gap. Unfortunately the safety car came out and the 15 seconds I’d gained over the faster guys behind quickly disappeared.

“When the safety car went in again I felt a problem with the brakes, which had got very hot and were fading, with the pedal getting very long. That concerned me as we were only half an hour into the race, so I decided to drive more conservatively and preserve them so they would last the entire race.

“Things were looking OK by the time I did my fuel stop at the end of my first stint, and the second started well. However I tangled with a GTC car that didn’t leave me enough room and turned in on me.

“I took evasive action but unfortunately he spun around and tagged me, doing a little damage to the rear. Worse, I lost a place while it happened and we never got it back.”

The remainder of his time in the car proved quieter and he handed over in third place: “After that my stint was reasonable, plugging away with not much to report. George drove a strong stint, mostly uneventful apart from a slight touch with an LMP car, but it was the same side as my impact so the damage was just cosmetic.”

Bell drove the final stint, with a podium in sight but one final challenge to withstand: “The last 20 minutes were quite tense as the car behind was catching up. We were running a conservative fuel map and the light was on for the last couple of laps, so our hearts were in our mouths, but he crossed the line in third place.”

Daniel was left reasonably satisfied by the outcome: “All things considered, I think the result was reasonable. I can’t help feeling a little disappointed not have second or even a win, but it was still a podium.

“Once again the team did a fantastic job – everything is gelling on that front. For example, we did pretty much the fastest pit stops of the GT guys. It wasn’t quite our day to get the win, but you can’t argue with back-to-back podiums and it’s just made us more eager to get on the top step.”

The next race in the championship will be on September 13-14 at Paul Ricard – a circuit Daniel knows well: “I’ve always liked it there – it’s so well maintained that it’s almost like driving into a country club.

“I enjoy driving the circuit too – it’s fast and flowing, and there is a lot of run-off which allows you to push to the limits without worrying about writing off the car if you make a mistake.

“It’s going to be exciting getting back into the car there – I’ve done well there in the past and had a couple of podiums, but I’ve never raced there in a GT car so it’s going to be a new chapter for me.”

The Red Bull Ring was a new circuit for Daniel

Wheel-to-wheel action at the start

Daniel made a strong start to the race

Daniel pushed hard through his stint despite the heat

Back-to-back podiums for Daniel and team

The team are aiming higher for the last two races

Over the summer break from racing Daniel’s site will carry a series of features exploring behind the scenes of racing – starting with a look back to earlier in the season, when ELMS visited Imola on the anniversary of Ayrton Senna’s death there.