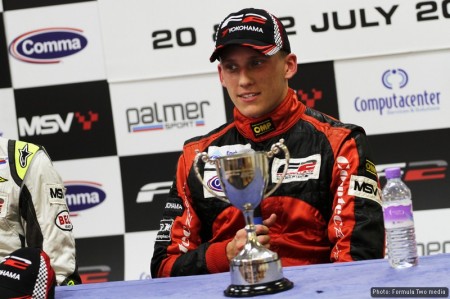 Daniel laid the groundwork for a storming end to the 2012 F2 season by earning his second podium of the year at the unique setting of the Paul Ricard High-Tech Test Track.

The weekend’s first race saw him qualify third, lose places at the start, but battle back thanks to his ability to unlock the speed in the Williams-designed JPH1B Formula Two car.

He said: “All weekend we had very strong pace and I hope this will repeat in the future so I can get the wins I’ve been looking for. In general we had some outstanding race pace – really strong, consistently quicker than everyone else.

“Some of the other guys could match it, but only for a lap or two and then they dropped off while I was still putting in the hot times. It was a good weekend but the potential was for a lot better, as I made a few mistakes.

“But I’m knocking on the door now – every time we go out there, bar Brands which was a bit of a strange one, we’re getting better and better, and it’s only a matter of time before we get there and take a double win.”

Although Daniel came into the weekend with an advantage over most of his rivals thanks to his past experience at Paul Ricard, this proved to be short-lived. “It wasn’t long before people began to figure out what to do,” he said.

“Paul Ricard is like no other circuit in that you can do what you like without hitting a barrier. Pretty soon everyone found the limits of the car and circuit because there is no penalty for going off. So knowing the circuit didn’t give me as much of an advantage as it might have.”

Despite that, the weekend started well: “First quali was good. The potential was there for more, but the front two rows is always good. However, I created work for myself with my starts.”

In contrast with the Brands Hatch weekend, where Daniel’s starts were a rare bright spot, at Paul Ricard he struggled to find the ideal balance off the line for his turbo-engined car: “I’ve been used to naturally-aspirated engines for the last few years so it’s hard to get used to the turbo. Too much and you get a lot of wheel spin, but if you drop the turbo you bog down because of the lack of engine power.”

In race one he suffered wheel spin at the start but recovered thanks to pace, and use of the speed-enhancing boost system: “I managed to battle back to third. I caught up with the other two guys, but had run out of boosts and so couldn’t challenge them. But third isn’t a bad run.

“After the good result on the first day I was looking forward to trying dominate the second, but the plan didn’t quite work out. In qualifying, I got a little bit caught up in traffic during my boost lap. It was unfortunate more than anything – the potential was there to do better.”

Starting far back in the field for race two, he suffered the opposite problem from the first race and bogged down at the start, finding himself among the more inexperienced drivers at the rear of the field – a dangerous place to be.

“I was trying to battle my way through and some of them were putting moves on me that could have led to me being taken out of the race,” he said. “You have to get out of the way – if you’re just concentrating on taking your usual line into the corner, you’re going to get collected and that’s your race over.

“The race pace again was very good, so I managed to catch up from some margin back. Unfortunately I’d used my boosts fighting with the back-markers so, by the time I got back up to the other guys, I had to overtake the old-fashioned way. But I had the pace so that wasn’t too bad.”

The series is now taking its summer break, and will return at the Hungaroring on the weekend of September 7-9.