It is unusual for me to get to drive many supercars outside the racing world – yes,  I have driven some seriously impressive machinery on circuit, but rarely do I get the chance to drive something that is less sole-purposed (as a racecar is), and still a serious machine on the road. On this occasion I had the opportunity to take the new AMG GTS for an extended test-drive with Will, the Mercedes Benz of Poole salesman who – after a few nicely-poised slides on the way back to the showroom – would soon come to say, “yeah, you can drive”. 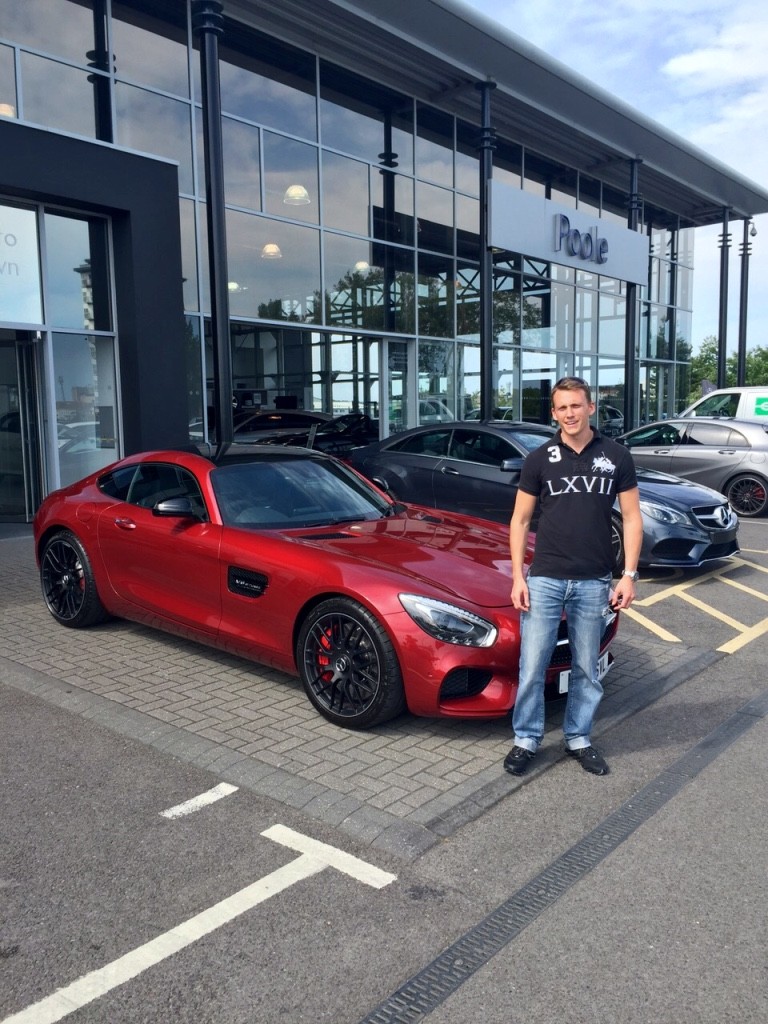 One ambition achieved: next up is owning it as well as driving it

I have been dying to drive this car since it was unveiled in September 2014 at the Paris Motor Show. I have to hold my hands up and say that its predecessor, the Mercedes SLS, was a car I’ve never quite gelled with. Apart from the annoyingly good straight-line speed of its GT3 version, which I discovered on-track against my Aston Martin Vantage GT3, the SLS just doesn’t quite have the flair that I’d come to expect from Mercedes.

However, the AMG GTS is in another league.

From a distance the lines and haunches, with its low, fat stance, look simply beautiful. The lower bumper intakes have a much more aggressive presence but remain fluid and smooth as the rest of the bodywork pursues. The overall size and dimensions of the GTS are squatter, being some four inches shorter, but surprisingly just as wide as the SLS. The GTS looks more purposeful with the cockpit set far back, plus optional meaty black forged rims and wing mirror stalks that are beautifully-crafted in their own right.

I wasn’t fortunate enough to sit inside the cabin of the GTS that had been lavished with carbon, bucket seats or Alcantara (other than the steering wheel). This said, the interior is a sight to behold. The centre console is shaped like the bank of a V8 engine, with four buttons on each side, and a stubby gear selector for good measure. The detail in general is to such a high standard that even the air vents wouldn’t look out of place in a Bentley Mulsanne. The cockpit is a truly lavish place to be – but always reminding you of the racing-inspired design.

However, visuals are only a minor influence on why I love this car. Powering the GTS is a 4.0 litre twin-turbo V8 producing a goliath 510PS and some 650Nm of torque; this powers the GTS from 0-100kph in 3.8 seconds and continues all the way to 310kph. It is not the traffic-light races that the GTS will be known for. It is the massive midrange punch that will make almost anything seem to select reverse gear by contrast when fully pinned at motorway speeds – this thing is just ruthless! Two cleverly-placed turbos in the “V” bank of the engine work together seamlessly to give immediate and never-ending power. I’ve driven a lot of quick cars but this would rank pretty high.

Handling-wise, with all the dampers fully fired up, it’s almost a little too harsh for British roads. However, take these down a notch via one of the many buttons, and suddenly the GTS really comes into its own. The steering is more on the light side that could initially be interpreted as numb. But, after a little getting used to, the direction change is phenomenal and yet still manages to keep the car incredibly flat through hard cornering. A lot of this comes down to the 47/53 (front/rear) weight distribution of the AMG GTs and the fact that the entire spaceframe weighs in at 231kg. Even the driveshaft is made out of carbon fibre. The kerb weight comes in at 1570kg, which is only 15kg more than my own hatchback A class A45 AMG. Impressively for the GTS, the rearward-biased weight helps squat the suspension down nicely to offer fantastic traction in the early, generally over-powered, gears.

However, this animal becomes as much of a daily driver as a C-class diesel with comfort mode engaged. I’m almost convinced that, with the effortless power the GTS has, it could actually rival most of the Mercedes range for comfort and driveability. The main article that reminds you of the power that lies beneath is the burble of raw V8 notes with every slight depress of the throttle. On cruise, however, it is blissfully refined and quiet.

This finally brings me to the noise, of which this has a profuse amount – and I have saved the best aspect until last. I have really only experienced full-blown backfiring that can be felt in your chest with race cars. But AMG, the masters of engines and exhausts, have managed to recreate that same feeling. With sports mode engaged, and the exhaust valves open, the pops, bangs and thuds coming from backing off the throttle and downshifting gears are brutal. There is the capability to extinguish the flames and drive without all the fuss with just a press on the exhaust valve button – and yet you can be pushing on in sports mode with full use of the exotically-crafted metal paddle shifters.

Seeing the GTS ‘in the flesh’ and being at the helm has made me want one all that much more. I felt almost gutted walking away from it after the test drive, similar to that feeling you have saying goodbye to a group of friends after a holiday you’ll never forget. I had two boxes to tick with the AMG GTS; one was to drive it and the other to own one.

Many thanks to Williams Thomas and Sandown Mercedes Benz of Poole.

This entry was posted in Features and tagged AMT GTS, Mercedes, Mercedes Benz of Poole, review. Bookmark the permalink.

Please go to the Instagram Feed settings page to create a feed.